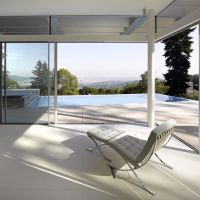 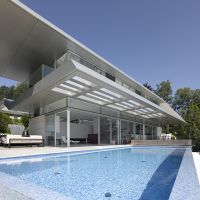 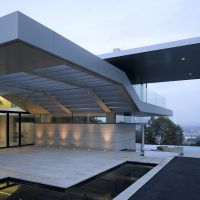 A young entrepreneur purchased a land on the slope of the Poestling Berg, a mountain overlooking Linz, the capital of Upper Austria. In 2007, he commissioned the architects to design a family residence of 650sqm comprising living, sleeping and garage area. The design aimed at integrating Villa A with the terrain, thus blurring its boundaries with nature.

The property of around 5000sqm sits amidst an old tree population, overlooking the city, providing an intimate yet vantage location. The more slanted east side hosts a small forest of fir trees, whereas broadleaf trees scatter along the western slope. The latter dictated the orientation of the living areas that face south-west opening up to panoramic views of the city and garden. On the other hand, the north façade facing the street is closed with natural stonework.

The dynamic concept of blurring the boundaries is enhanced by using the same materials on the interior and exterior: travertine stone covers both walls and floors. Moreover, the wooden floor used for the dining level extends into a wooden deck for the terrace.

Following the natural topography, the villa becomes partially underground, where the garage, building services, fitness area, and guest room are located. The living areas are distributed on the lower levels, allowing direct access to the surrounding garden, while the bedrooms occupy the upper floor. To visually distinguish the spatial program, the architects designed the upper floor differently than the lower two levels, both formally and structurally.

The sleeping areas are embedded into a roof structure carried by steel columns. The columns, completely detached from the massive stone walls below, allow the steel structure to hover over the living areas.

The villa was designed as an object to be experienced gradually and sequentially. Accordingly, the design methodology located primary views and situations. Then spatial visions were rendered in sequences, in which the circulation around and through the villa was set up as a storyboard. Lastly, the clips were joined to create the building configuration.

The building adopts climate responsive strategies combining passive and active systems to reduce the carbon footprint. The cantilevering roof structure protects the façade from south radiation, while allowing the lower winter sun to heat the spaces. The central hall acts as a chimney to ventilate the indoor areas. Air velocity is generated through stack ventilation, enhanced by the glazing on the roof that acts as a solar chimney. This implementation of the passive energy concept is supported by a recuperator in the ground and sun collectors on the roof. The villa is accordingly highly energy efficient and fulfills all requirements of a “green building”, according to European building standards.